Showing posts from March, 2009
Show all

Fran Campbell Team RE/MAX Lake of the Ozarks cares about environmental sustainability, and one of the many steps we’re taking to go Green is our participation in Earth Hour 2009. On March 28th from 8:30 to 9:30 pm local time, millions of individuals, companies and communities worldwide will turn off non-essential lighting to show support for action on global climate change. Our associates are encouraged to take part in this global effort, and this year we are extending this encouragement to our family and friends. We hope you will join us in Going Green, and observing Earth Hour 2009. For more information, visit EarthHour.org You can upload your ‘on the night’ photos and videos to flickr and YouTube respectively, and then add them to the Earth Hour flickr group and the global YouTube Group .
Post a Comment
Read more

By Fran Campbell Team - March 19, 2009
Wednesday, March 18, 2009 Donald Trump says "Now is the greatest time ever to buy a house" You probably either love him or hate him but you must admit Donald Trump knows real estate. In an interview last night on Larry King Live, Donald Trump said "this is now the greatest time maybe ever, maybe in history, to buy a house." Please see the transcript below: KING: Latest report, housing up in the last month, in February. And it was up in units that were apartment buildings. What do you make of that? TRUMP: I think it is the beginning of a positive trend. Real estate has been absolutely beaten down. And this is a great -- as I told you before, I am buying a lot of real estate now. This is a great opportunity to buy real estate. It is a great opportunity for somebody, even with not a lot of money, to go to a bank and buy a beautiful house, better than they ever thought they would buy. The bank will take back financing. They won't give you financing. But if they
Post a Comment
Read more 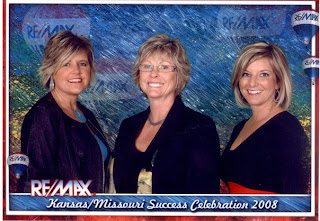 Fran Campbell Johnson, RE/MAX Lake of the Ozarks, was honored at the RE/MAX Mid-States Success Celebration in Kansas City on February 26, 2009, with the Platinum Club Award for 2008. The award honors successful agents who have earned at least $250,000 in commissions in the past year. In 2008, only 4% of the RE/MAX network achieved this prestigious award. The RE/MAX Mid-States Region is comprised of Arkansas, Kansas, Western Missouri, and Oklahoma and currently has 1,964 active realtors. On March 5, 2008, at the RE/MAX International Convention held in Las Vegas, NV, Fran was also honored with the “RE/MAX Hall of Fame Award” during the “Night of the Stars” Awards Ceremony. The “Hall of Fame Award”, which honors successful agents who have earned more than $1 million in commissions during their careers with the company. Fran Campbell Johnson has been working in the real estate industry for more than 20 years and joined RE/MAX Lake of the Ozarks in May of 2004. Winning these awards ar
Post a Comment
Read more

By Fran Campbell Team - March 09, 2009
At Fran Campbell Team RE/MAX Lake of the Ozarks, we strive to make the purchasing process as easy as possible for our clients. Here are 10 Mistakes commonly made by buyers, that if avoided, will make the transition so much smoother. 10 Mistakes Buyers Make: Making an offer on a home without being pre-qualified. Not having a home inspection. Limiting your search to open houses, ads or the Internet. Choosing a Real Estate agent who is not committed to forming a strong business relationship with you. Thinking there is only one perfect house out there. Not considering long-term needs. Not examining insurance issues. Not buying a home protection plan. Not knowing total costs involved. Not following through on due diligence. It's easy to protect yourself from these common pitfall. Let Fran Campbell Team help you! Be sure to check out all Lake Area Real Estate Listings at www.FranCampbell.com/blog Oh, by the way... whenever you come across people who are thinking about buying or selling
Post a Comment
Read more
More posts