Showing posts from March, 2010
Show all

By Fran Campbell Team - March 17, 2010
Published: Wednesday, March 17, 2010 9:18 AM CDT
Recreational boat owners who paid state sales taxes on a boat purchase, or those who secured a loan to finance a boat, may have some tax deductions available when filing their 2009 federal income tax return.

For those owners with a secured boat loan, mortgage interest paid on t…
Post a Comment
Read more 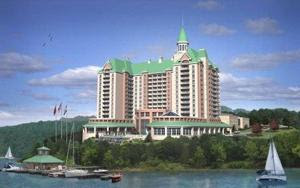 CAMDEN COUNTY, MO - After over two years of legal wrangling, the City of Osage Beach has prevailed against Four Seasons Marina Rentals, Inc. The lawsuit questioned the legality of the decision by the city to extend a $3.7 million Tax Increment Financing district to John Q. Hammons Hotels & Resorts for Chateau Lake of the Ozarks. Four Seasons Marina Rentals contested the "blighted" designation given the piece of property on the Grand Glaize Arm of the lake.

Construction of the $100 million, 15 story, 320 room luxury hotel was put on hold pending legal resolution. Senior Judge B.C. Drumm, Jr. issued the declaratory judgment Monday, March 8, upholding the constitutionality of the decision made by the City of Osage Beach to extend the TIF to Hammons.